ACCUEIL
SHARE
Menu principal
We use cookies to enhance your experience when visiting our website. Learn more
Abonnez-vous
It is to be a photo competition during which the entrants from the OWHC member cities are requested to submit a characteristic view of their city.
The topic “Colours of World Heritage” has to be shown in the submitted photo material. The target is to entice citizens as well as guests of the North-West European OWHC member cities to gain a new perspective of World Heritage sites.

The member cities of the regional secretariat announce their participation in the contest and consequently advertise the competition on a local level. They will be granted with a support of 500 Euros for prize money. After the photos have been uploaded, the best picture of each participating city will be nominated by a jury within each OWHC member city by 30 November 2015 and awarded a prize. At this first competition level there is only one winner per city. The jury will be composed of representatives of the administration of the relevant OWHC member city.

After 30 November 2015 the prize winner will be announced on the internet and in the established media as well as at the subsequent award ceremony. The winner will be informed in writing by his OWHC city.

At the second competition level, the winning photos of all participating OWHC member cities in the region will be evaluated by a jury composed of representatives of the General Secretariat in Quebec/Canada, the Regional Secretariat Northwest Europe as well as two OWHC member cities. The overall winner of the photo competition will be determined by 11 December 2015 and announced publicly worldwide after that date.

The overall prize will be awarded EUR 700 by the Regional Secretariat.

From then on, the winning photo will be used internationally as part of the PR at the OWHC in all media, i.e. online, print, at conferences, congresses, etc. 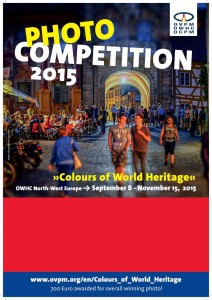 More than Meets the Eye – The Magic of the Panorama